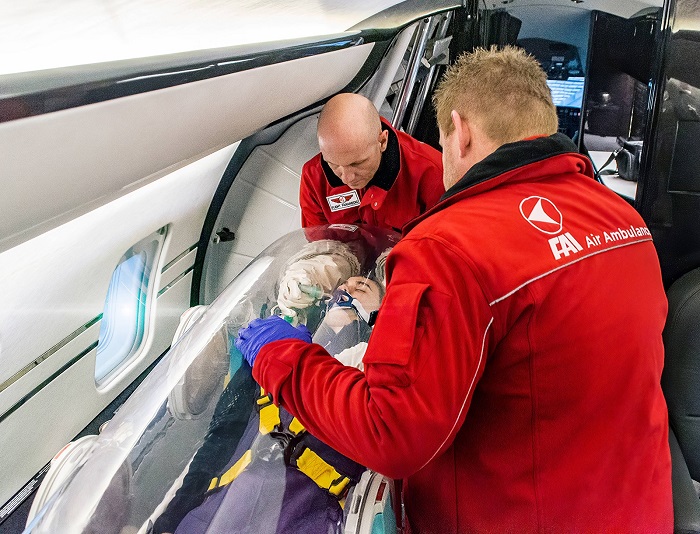 FAI works around the clock to meet critical Covid-19 demands

FAI rent-a-jet AG, Germany’s leading Air Ambulance Specialist and Special Mission Operator has been working around the clock to help evacuate those in need following unprecedented demand from the spread of coronavirus.

This includes both medical evacuations of infected patients and repatriation flights of unaffected healthy individuals from all corners of the globe.

The company is currently operating at maximum capacity, averaging around six missions per day with its 10-strong fleet of five Learjet 60s, four Bombardier Challenger 604, and one Global Express air ambulance aircraft. Additionally, FAI is supplementing its fleet with its executive charter fleet of business jets.

Following its recent purchase of two portable self-contained isolation units, EPI-Shuttle, FAI can transport infected patients without any risk for the flight or medical crew. All medevac missions are accompanied by a trained dedicated medical team, for pre-flight temperature screening, and the availability of medical/nursing care in flight as required.

Siegfried Axtmann, Chairman and Founder of FAI Aviation Group said: “We are working hard to fulfill all requests coming in 24/7 for repatriation and medevac flights as rapidly and as efficiently as we can and will continue to do so as long as is practically possible. We deeply regret that we can’t help everybody immediately. The demand is such that we currently have a backlog of three days.“

FAI has enlisted the support of all its 70-strong team of pilots to perform duties. The biggest challenge remains scheduling given entry restrictions now in place in many countries around the world many of which are not allowing entry for crew rest and pre-positioning.

FAI is the world’s largest fixed wing air ambulance jet operator by revenue, logging far above 10,000 hours per year flying air ambulance missions. The company’s fleet is based at its Headquarters at Albrecht Dürer International Airport in Nuremberg. The air ambulance division specialises in air support in hostile areas for the world´s largest NGO. It typically averages three intercontinental medical evacuations per day for its global client base.

FAI runs a 14,000 m² carbon-neutral fixed-base operation at its Nuremberg, Germany headquarters, employing a full-time staff of 220 people, including 60 mechanics and engineers at its in-house maintenance centre, plus some 50 part-time physicians.

FAI was proud to receive the Diamond Safety of Flight Award from the European Business Aviation Association (EBAA) in May 2018, marking the highest safety recognition awarded by EBAA to member companies operating business aircraft for 50 years or 100,000 hours without accident.  In autumn 2018 FAI Aviation Group scooped “Germany´s Best Airline” accolade in the 2018 Focus Money Awards.

In October 2019 FAI’s Air Ambulance Division was one of three finalists for the 2019 ITIJ industry award – Air Ambulance Company of the Year. During the Dubai Airshow in November 2019 FAI was honoured with an Aviation Annual Achievement Award, in recognition of its 30 years of air ambulance and special mission flying and a 10-year anniversary award from MEBAA, reflecting the fact that 20% of FAI’s flying activity is now in the Middle East.

FAI is an official partner of McLaren F1 Racing.