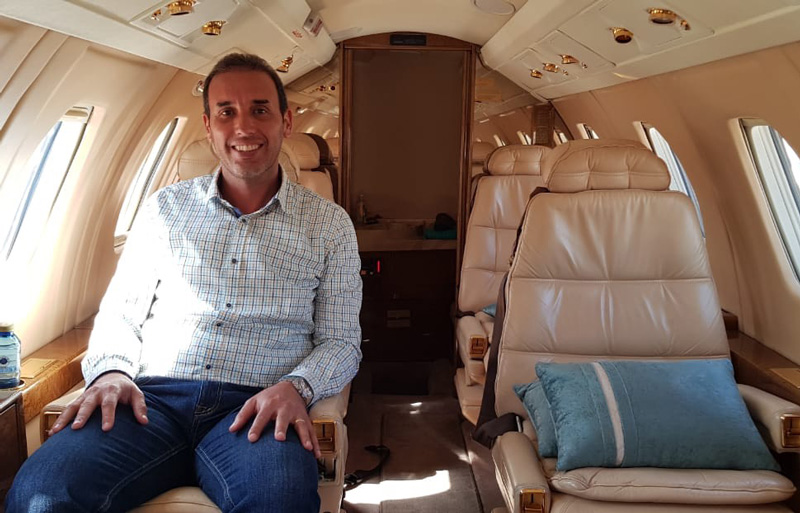 Sarah Airways specialises in VIP private transport and medical evacuation – a growing market in Morocco. Founder and CEO, Khalid Serghat, shared his vision for the company with Vincent Chappard.

Sarah Airways took off in Morocco under the leadership and full ownership of Khalid Serghat in September 2018.
“I wanted to launch a decade ago but conditions were not favourable at that time. Today, the environment has changed, the market has grown, the need is there,” he explained.
The final decision was taken during the first half of 2018, followed by the purchase of a first aircraft, a Cessna Citation VII.
Serghat then formed his team. “We established our roadmap in coordination with the DGAC of Morocco. We started to operate in September 2018. Our second aircraft, a Citation III, entered into service late in 2018,” he said.

The airline focuses on VIP transport and medical evacuation segments and operates mainly in Europe, Africa and the Middle East. “We want to develop our offer with greater flexibility in these regions and expand our fleet to adapt to all types of journeys, wherever there’s a demand,” said Serghat.
Based at Mohamed V International Airport in Casablanca, Sarah Airways also caters for rapid delivery of parcels for import and export.
It also plans to take delivery of a third aircraft, a Hawker 900XP, which will have a greater range. This will enable the airline to provide for more international and direct flights, particularly to New York and Dubai. It works mainly with private customers, government and insurance companies in these regions.

The airline’s financial results are positive after 10 months of operation. “We have achieved almost 95% of the objectives in our business plan, with more than 150 flights,” said Serghat.
Sarah Airways intends to consolidate its market share in Morocco and enhance its offer, while maintaining and capitalising on its competitive strength – punctuality, quality of service and value for money. It will also tap more international customers to fly further.

One of the main pillars of the airline’s development strategy is training. Serghat is fully aware that the success of Sarah Airways depends, above all, on the quality and professionalism of its staff, its pilots, its crews and maintenance teams. Consequently, training is an area where he is investing time and resource to ensure optimal fleet operation.
The airline has five mechanics and three crews; a fourth is currently finishing its training.
Morocco counts itself among the pioneers for the setting up of a medical hub and emergency evacuation. The country has a good infrastructure. For Serghat, it is a solid and fully expanding market with a real growth potential.

Even though Moroccan authorities are supporting increasing development within the aviation industry and related businesses, there is, believes Serghat, a need to enhance competitiveness in this thriving sector, through greater “support and flexibility” to the country’s operators and supply chains.
Over the past decade, Morocco has emerged and consolidated its place as a significant platform for the aerospace industry with a high-skilled workforce, competitive labour costs, a favourable business environment and diversified trade agreements. The kingdom has bet on its geostrategic position, at the crossroads of Europe and the Middle East, to enhance the attractiveness and the competitive edge of this sector.
The Moroccan Space & Aeronautics Industries’ Group (GIMAS) was set up to fuel the growth of the industry. Morocco has also invested massively in training through the Aerospace Training Institute and the Institute for Aeronautics and Airport Logistics (ISMALA) to feed companies with required high-quality skills.
Serghat wants Sarah Airways to play a major role in this growth. His goal is to reach a fleet of eight aircraft within the next five years to become a real driving force in Morocco and the wider region.